Chitwan National Park is a famous destination for Jungle Safari in Nepal. And also it is very popular worldwide for wildlife habitation. It situates at the southern border of Nepal with India at an elevation of 300 metres or less. The national park lies between 27°34′ to 27°68′ North latitude and 83°87′ to 84°74′ East longitude. It was established in 1973. And since its declaration as World Heritage Site in November 1984, it has been well-known for its unique biological resources.

The national park covers 1,182 sq km, and the surrounding buffer zone area is 766 sq km. It has a tropical and subtropical bioclimatic zone with a tropical monsoon environment and high humidity all year round. The mean annual rainfall is 2000 – 2100 mm, with over 80% falling during the heavy summer monsoon season. In the summer, the maximum daily temperature is around 35°C, and nights are around 20°C. Similarly, in the winter, the daily maximum remains around 25°C, but at night can fall under 10°C.

The biological richness of the park is exceptional, with eight ecosystem types. It includes seven forest types, six grassland types, five wetlands, and three main river system habitats. According to an available record from (WWF Nepal, 2006a), faunal variousness consists of 50 mammals, 49 species of reptiles, 526 species of birds and amphibians, and 120 fish species.

Likewise, as per available records from UNESCO, 2003, the flower-patterned diversity of the park consists of more than 600 plant species, including 3 gymnosperms. Similarly, there are 13 pteridophytes, 415 dicotyledons, 137 monocots, and 16 species of orchids.

It is one of the country’s most extensively visited national parks. However, those involved in the park’s management have confronted protection and conservation challenges. In addition, there are other challenges in addressing the concerns of those living adjacent to the park and marketing with increased tourists.
Moreover, farming and tourism are the livelihood of the protected areas and the surrounding village. So, there is sometimes a tussle between animals and villagers, but the villagers adopt the co-existence of natural habitat and ecosystem.

Sauraha is a village or townlet in Chitwan situated near the Chitwan National Park and the Rapti River. It has the eastern entrance to Chitwan National Park. And jungle safaris are available for budgeted and mid-priced tourists. While you are in Chitwan, visiting a small and quaint Tharu village of mud and daub huts and houses is interesting. Due to the influence of tourism activities, it has grown into a small quiet town full of western-style hotels and resorts, restaurants, internet cafes, and gift shops. 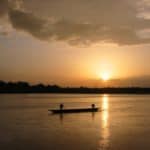