Incredible Hike to Everest Base Camp

A hike in the Everest Region is a challenging and inspirational introduction to Nepal’s magnificent mountain scenery, the ‘Roof of the World’. Arriving at the Everest base camp is to complete one of the most memorable hiking experiences the world has to offer, a classic adventure into the wilderness.

The hike takes you through the homeland of the Sherpa people to come face to face with the peaks of the world’s highest mountain range, with Everest at 8848m above sea level, and the neighboring peak of Ama Dablam, one of the most beautiful in the Himalayas, rising up to its sharp pinnacle at 6812m above its juniper-covered lower slopes. Other peaks include Mera (6476m), Island Peak (6183m) and Pokalde (5806m).

The mountain slopes around Lukla, the starting point of your hike, are covered in Silver Fir and Blue Pine forest. Much of the forest was cut down for building and firewood as the area became more popular as a tourist destination, but some fine efforts have been made to reforest the area, which is rich in wildlife. Conservation is a priority in the Everest region, particularly in the area around the Everest Base Camp which has been transformed over the years with the almost constant turnover of climbing expeditions aiming to conquer the peak.

However, nothing can spoil the sheer beauty of this mountain wilderness, which casts its own special power over anyone who visits it. Memories of your days on the mountain will remain with you for the rest of your life, whether of the wide open spaces, the pure deep blue of the sky at such high altitudes, the friendliness of the local people, or the pleasure of seeing the magnificent snow-covered peaks coming closer with every day, becoming almost impossibly dramatic, a great looming presence that demands your respect and awe. This is a land of contrasts, of forested slopes and fast flowing rivers, carefully cultivated terraces and bare rocky slopes, ice fields and glaciers, the companionship of the trail and nights in the guest houses along the way, or the magnificent isolation of a starlit night among the high peaks. 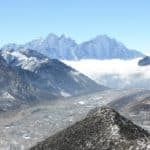 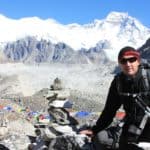 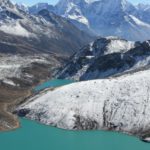