You are here Home » Everest Region

The Everest Region, also locally known as the Khumbu region, is a sub-region in Solu Khumbu located on the Nepalese side of Mount Everest.

You will trek through the hinterland to the Himalayan range’s highland. At the same time, you will not only enjoy the view of the world’s highest mountain, Mt. Everest, at 8848, but you will also witness many other mountains above 7000 metres, such as Mt. Lhotse, Mt. Nuptse, Ama Dablam, Thamserku and more.

A trek in the Everest Region, also known as the Khumbu region, may be tough for some travellers, but it’s an inspirational introduction to Nepal’s magnificent mountain scenery. It’s known as the ‘Roof of the World’.

Arriving at the Everest base camp is to achieve one of the most memorable trekking experiences that the world has to offer. It’s an exclusive adventure experience on the wilderness trip. However, it’s not mandatory to reach the Everest Base camp to experience the unique lifestyle of the local people.

Similarly, alternative trek options are available these days, such as hiking to EBC and returning on a Helicopter to Lukla or even a direct heli flight to Kathmandu. So there are plenty of possibilities for a visit to the Khumbu region or Everest region. However, most trekkers follow the normal itinerary of flying from Kathmandu to Lukla and trekking along the way to Namche Bazar, Tengboche Monastery, Dingboche, Pheriche, Gorakshep, Everest Base Camp and returning the same way to Lukla. This itinerary will take roughly 10-11 days.

Furthermore, those trekkers looking for a more advanced trek can combine the Everest Base camp trek with a visit to Gokyo Lake, Chola Pass, and Renjo La Pass.

Along the trail en route, plenty of guesthouses or lodges are available. If you plan a trek in peak seasons such as October – November, March, April or May, it’s advisable to make pre-book. They will look after your logistic arrangement if you book a trek with a local trek agency. In major places of the Khumbu region, such as Lukla, Parking, and Namche Bazar, there are varieties of choices of guest houses. You can book from a standard budget hotel to a luxurious hotel. For example, Everest View Hotel is a luxury hotel in Syangboche, just above Syanboche Airport.

When to trek in Everest Region?

It’s possible to trek all year round in the Khumbu region. However, it is the best time from the beginning of March till the end of May. Similarly, another best time is from the beginning of September till the end of November. Besides that, you can also trek in winter, not going to Everest Base Camp. Instead, you can trek up to Tengboche Monastery.

What to eat there?

Most guesthouses or lodges offer similar menus of Spaghetti, Fried rice, Apple Pie, Oatmeal, Hash Browns, omelettes, Dal Bhat, etc. However, in the major rural towns of Lukla, Phakding and Namche Bazar, you can choose a wider selection from a menu such as Pizza, German Bread, Pastries, etc.

Be a Responsible Traveller

While walking on the trek route, you will encounter many religious objectives, such as Mani Wall or Stone. As a custom of respect for the local culture, people always pass the Wall or Stone, keeping them on their right-hand side and turning the prayer wheels in the clock’s wish direction.

There is a saying in sustainable tourism practice, “Just take a photo and leave your footprint.” Trekkers need to be as sensitive as possible towards the environment. Due to the extreme amount of trekkers passing through the Khumbu region, the ecosystem is under extreme pressure. Therefore, trekkers need to ensure that they won’t disturb any flora and fauna while trekking there.

As a responsible traveller, buy boiled water from guesthouses, not bottled water. And as far as possible, it’s advisable to order local meals and the same meal from all staying guests from the guest house. By doing so, you are practising sustainable tourism. Ultimately, you support the Sustainable Development Goals (SDGs) for our future generation.

Thus, as a responsible traveller, act locally and think globally!

Be a responsible traveller as far as possible to save our future generation.

Trek from lukla to Namche and Tengboche

From€1,338€1,254
10 days
Availability : All year round
Min Age : +8
Max People : 14
You are here Home » Everest Region A short Trek from Lukla Airport to Namche and Tengboche monastery, also known as the Glimpse of Everest Trek, is comparatively easy compared to other treks in Everest Region. The trek takes you up to Tengboche Monastery (3850m) through Namche Bazar, the gateway to Everest Base Camp. Although […]
(1 Review)
Book Now, Pay Later

From€1,464€1,327
14 days
Availability : September through June
Min Age : 12
Max People : 14
You are here Home » Everest Region Estimated reading time: 9 minutes Prepare to be inspired: Trekking to Everest Base Camp is an unforgettable journey and a chance to experience all the Himalayas. With this guide, you will learn everything you need to know about what it takes to make this incredible trip – planning, […]
(9 Reviews)
Book Now, Pay Later 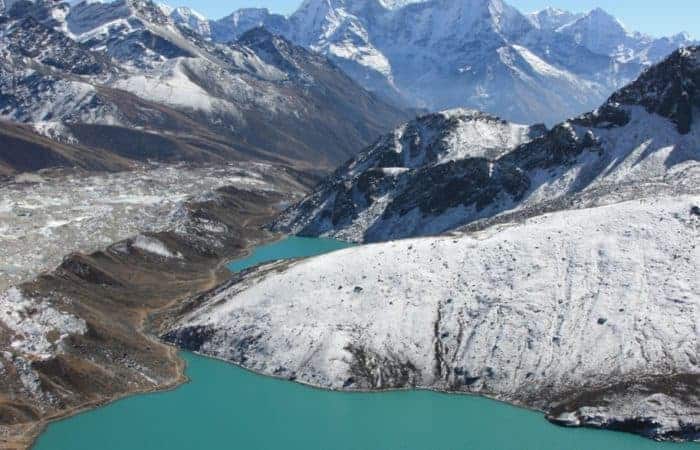 From€1,401€1,259
13 days
Availability : September through June
Min Age : +9
Max People : 14
You are here Home » Everest Region Embark on an unforgettable journey deep into the Himalayas with a Gokyo Lake Trek. With its spectacular mountain peaks, crystal clear glacial lakes, and picturesque villages, this trail will surely be an adventure you won’t forget. Discover more about what to expect and how to plan your next […]
(2 Reviews)
Special Deal

From€1,886€1,790
22 days
Availability : October through June
Min Age : 15+
Max People : 16
You are here Home » Everest Region   Everest Base Camp Trek through 3 high Passes of Renjo La, Chola and Kongma La; a once-in-a-lifetime journey begins in Lukla (2804m), where you’ll fly from Kathmandu. The flight itself is incredibly short and rarely takes more than 35 minutes; this gives you time to take in […]
(1 Review)
10% off

From€1,528€1,375
18 days
Availability : September through June
Min Age : 16
Max People : 14
You are here Home » Everest Region   Embark on a journey of natural wonders and mesmerizing beauty with a trip to the Chola Pass Trek. Learn about the trek with our comprehensive guide, plan your adventure, and explore breathtaking views along the way! The Chola Pass is at an elevation of 5330 metres. It’s an […]
(3 Reviews)

Trek to Everest Base Camp and return by helicopter

From€2,276€2,162
11 days
Availability : October - June
Min Age : 12
Max People : 5
You are here Home » Everest Region Estimated reading time: 2 minutes This unique trekking adventure takes place in Nepal, where you’ll experience some of the world’s most breathtaking scenery. Your journey begins in Kathmandu, where you’ll stay in an exclusive hotel before flying to Lukla, the gateway to the Khumbu region. Here you’ll board […]
(1 Review)